Johann Gottfried Tulla who was responsible for the rectification and training of the upper Rhine River established the Polytechnical School in 1825. It was the foundation for research and education in hydraulic engineering in Karlsruhe. Another milestone was the establishment of the first hyraulic laboratory by Theodor Rehbock in 1901. Through major advancements in theory and practice of hydraulic modeling the Karlsruhe school gained a worldwide reputation. 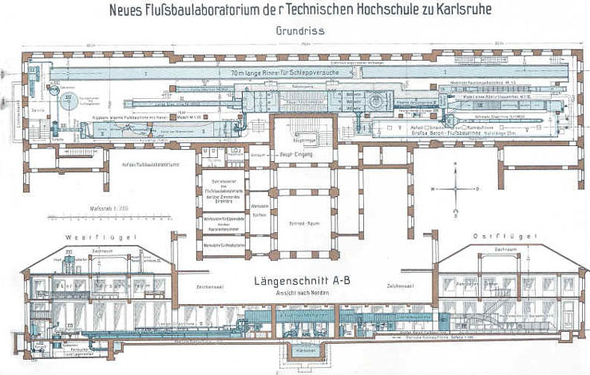 The Institute for Hydromechanics (IfH) was formed in 1948 as one of two successor institutes to the prior Chair of Hydraulic Engineering and Water Resources. In the succeeding years the IfH was involved in two major special research initiatives (SFB) sponsored by the German Science Foundation (DFG). These were the SFB 80 (1971-83) "Mixing and transport processes in flows" and the SFB 210 (1983-95) "Fluid mechanical design principles  for structures". These initiatives led to a major new research direction and expanded the laboratory installations.